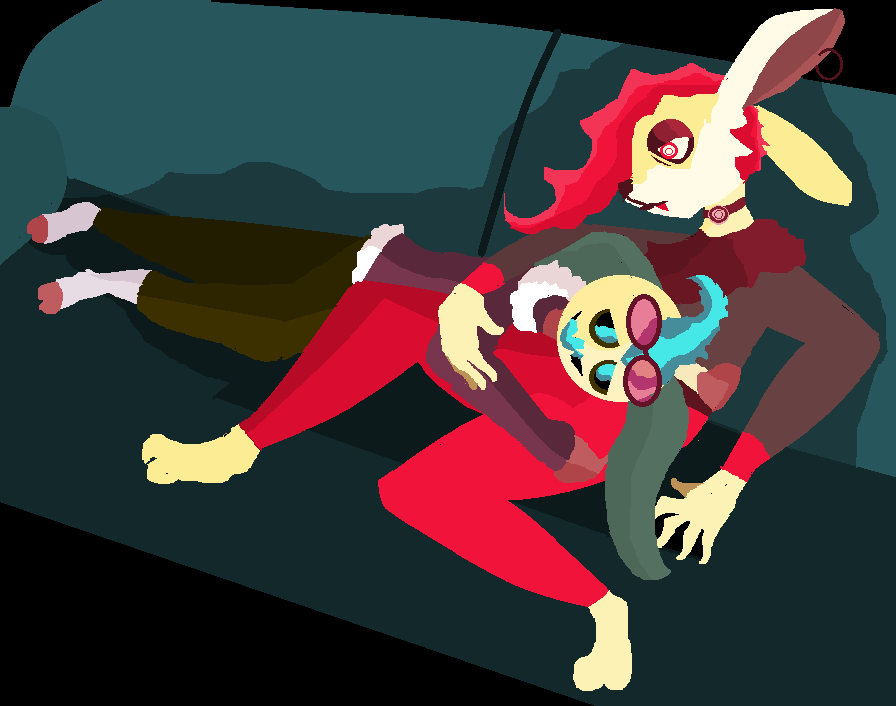 Reccommended reading prior: The Monument

Targe was settled down on the couch, letting a black and white horror movie play quietly on the television to add a little back noise to the room.

Spice, on the other hand, was busy preparing plates full of snacks and doing final touches on the room's decor.

The harmless blue flames emitting from his head flickered about as he hummed.

Targe: Whatcha working on over there?

Targe: Right, Kirk and Lex are showing up. Looking forward actually, missed them.

Spice: And a newcomer! Lex is bringing a friend.

Targe: A friend or a "friend"?

Targe: Yeah. Glad they still show up for Darkest Night every year.

Spice: Mhmm! Gotta put sad spirits to rest, clean our slates, and get a good reading for the next year. You done getting stuff ready on your end, by the way?

Targe: Course, safety first. Made sure this is gonna go as clean as possible. Haven't seen much of either of them lately though, they been alright?

Targe: Sounds about right for both of them. Kirk's always been good with tech-y stuff and Lex... is good at getting back up.

Spice: She's actually made some pretty big strides lately. She had a pretty big duel lately, was on the telly and all. Capital Park Summer Grudge Match. You see any of it?

Targe: Seen clips, barbaric stuff honestly. Ref should have called game as soon as someone got capped. Calling meddling there.

Spice: I know right? What the fuck was up with that?

Targe: Should have just outright ended there or let her tag out. She doing alright after that? Match seem pretty rough.

Spice: Seemed just fine over text and she's still doing fights for money so I'd say so, yeah.

Targe: That's good. Sounds like a lot's gone on though for them.

Targe: Makes me just a little nervous honestly. Hope we didn't cut into their schedules too hard.

Spice: I'm sure it's gonna be fine, they both really seemed like they wanna be here today.

Spice: They actually mentioned going to the festival tomorrow, you think you might be up for going as a group?

Spice climbs over the side of the couch and flops onto Targe.

Spice: You think you can win me a prize?

Targe: Easy. I'll go in, win big at the games, and after we'll split a pumpkin cake.

Spice: Kind of wish I had a costume ready... you think I could nab one last second?

Targe: Probably. You look the part already though.

Targe: Yeah. On a side note, you did a pretty good job with the place. Decor hits the mood just right.

Spice: You don't think it's overdone at all?

Targe: Nah, people will love it. Gotta drench folks in that fall mood you know?

Targe: Think that makes us experts more than anything.

Spice: It does. You know this is pretty cozy right now, The two of us like this.

Targe: Don't get too comfortable, they'll be here any second.

Spice: I know. Just taking in the moment a little...

They remained quiet, laying down without much more than the occasional noise and tiny smile at each other.

There was a knocking on the door. Targe scooted up, Spice a little hesitant to pull away.

Targe: I'll be back quick.