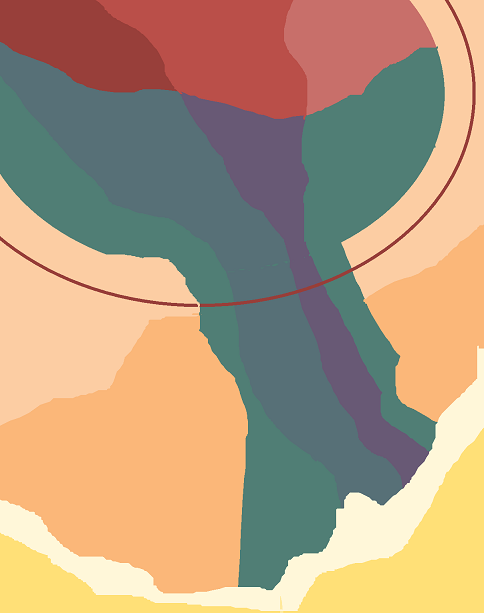 Summertime on the outskirts of Capital always blessed you with options on how to spend your afternoon. You could be at the local games and hobby shop optimizing your limited pocket change to join in on the most recent salt and scuffle that trends. You were offered by a friend to join in for a trek to the park to watch the pugilistic spars of local duelists aiming for belts and cash.

Yet despite having way more optimal choices, you've decided to visit the Monument against the wishes of every adult you've ever met.

The monument exists as a reminder of something very few left alive can say they've experienced but those who witnessed it describe it as the single most impactful day in the history of Plaza since the first person put their tracks in the sand. The battle is said to have gone on in the soil surrounding. It leveled entire buildings, forced the rich into hiding and put paupers in the thrones of war horses. Many sacrifices were made to contain a threat that nobody to this day fully understands and the scars left behind leave a fear in even those who came decades after.

But not you, you're braver than that. You're in middle school and don't have a single rational fear in the world. 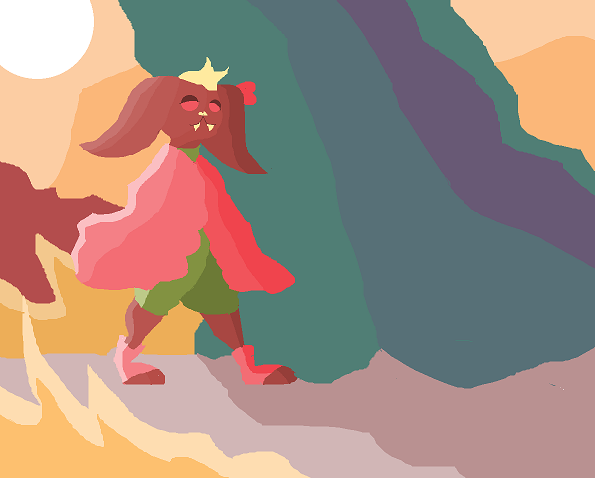 It's not too uncommon for kids to dare each other to enter the area, and you can't help but think of how cool you'd be if you came back with something to prove you did it. It's become a bit of a game for people your age really. No different than trying to summon phantoms with the bathroom mirror or light circles of cheap candles at midnight. There's no point of it in the grand scheme of things besides being something "scary" anyone can do easily.

So far so good though, you've made it right next to the very spot it stands. You wish you had a camera with you so you could take a photo for proof but you'd need mom and dad to get it developed and you know they'd ground you for the rest of the season if they saw it among the photos. It's towering, way larger than you'd ever be and incredibly intimidating. There's no plaque of any kind surprisingly. You can't help but wonder what any of it actually means since accounts of that day are so scattered and not even your parents can give you a consistent story.

Also much to your surprise there's a pond right by it, a little miracle that managed to survive in the dry heat. 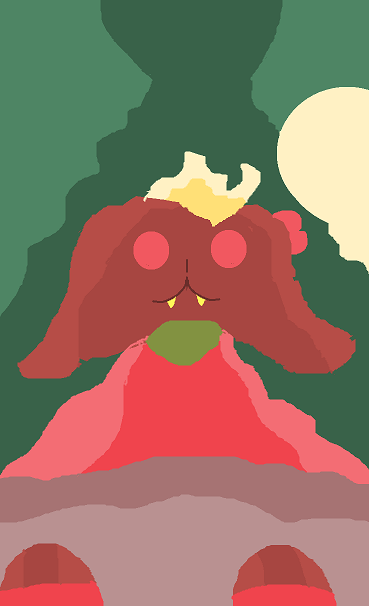 You find yourself strangely drawn to it. You really shouldn't be this close without anyone around but it seems too shallow for anything to happen if you fell in. Besides you're a good swimmer right?

You see your face in the water but can't make out a single thing past that. It's a little deeper than you made it out to be though. The heat around you tempts you to stick your hand in and splash it around a bit, it's probably not sanitary, but you can wash up when you get back right? You're gonna get dirty one way or another out here in the desert. 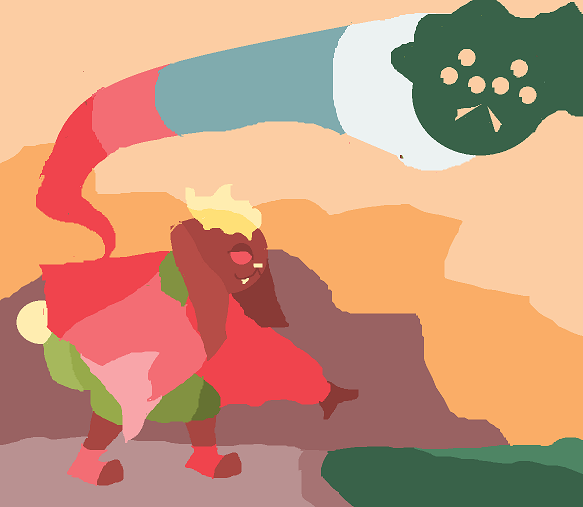 As you reach out you can't help but feel a presence looming.

Should you turn around?

Maybe it'd be better if you ignored it.

Don't you dare give it attention. It's nothing. If you look away it won't notice you.

You turn around against your better judgement. 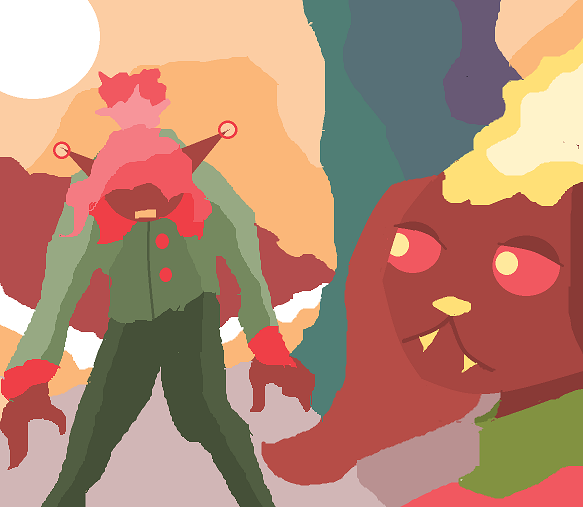 The crumpled form of a vintage construct in a military uniform approaches. They're in poor shape.

You approach them. "Hey. You okay?"

They nodded. "They send you out to pull us out?"

They tilt their head up to get a look at you. You make out a glowing eye. "Ah, just a Dopple unit. Young one too. Didn't think they'd be getting back to us anytime soon. We gotta get you outta here kid, find your family."

"I know where my family is. You don't look so good though, I can take you back to town to get patched up."

"I can take you to a repair shop if that's what you mean. Don't know what you're doing all the way out here though."

"I'm looking for my squad, we planned a regroup but I haven't been able to detect any sign of them. I'm a little worried."

"I'm sure if we take you back we can find someone who can help you out... you got a name?"

"Lex. Dopple. Nothing that special yet about me but uh... I'm working on it."

"Like to think. There's something special about everyone. You really know the way back?"

"Promise I'll wait for you."

You start trekking at a casual pace together. You look over him every once in a while. You'd offer to shoulder him up but he's easily the tallest person you've ever met. You make an attempt to start some small talk.

"So when you say royal rancher, that means you're some kind of personal bodyguard right? Like, you protect famous people?"

"Ever work with any movie stars?"

"Nope. Never even met one before. That'd be a pretty nice gig though once things are all over."

"...You been living under a rock or something kid? World's been on fire lately. I'm surprised anyone let you walk out on your own this far."

"My parents don't mind as long as I'm back by dark."

"You're too brave for your own good." 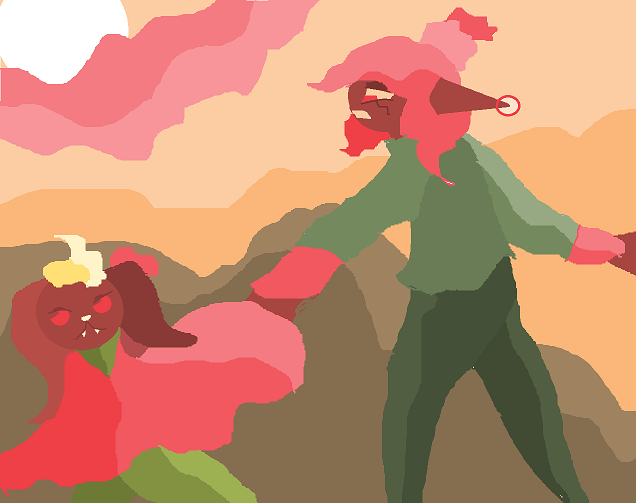 "Maybe. You did find me so... not yet. Just stay out of trouble if you can help it, we're deep enough out here where predators are a real worry."

"This place has been cleared for years. At worst maybe you'll see a few lizards."

"Like, you said you were only here a few days right?"

"Pretty sure. Seems like the worst of things has blown over though from the way you're talking. Gives me a good chance to find the rest of my crew. Regroup, pray we eventually get everyone together again, maybe take a few break days to recover. Can't imagine they're doing too much better."

"Mostly, a few other models here and there too. Why?"

"You're the first rancher unit I've seen in person. Second generation too, so like, that means you’ve been in service a long time right?"

"No not really... I'm surprised you haven't seen more. There's lots of us living in Capital."

"Huh.... you really all that sure you've only been wandering for a few days?"

He goes silent on you. You definitely upset him... You try changing the subject.

"So... you got any good friends on your squad?"

"Ton of them. When we're on break we like to go out to this sandwich place by the office. It's not especially good or anything but it's easy to walk to and in our budget so it works out. They also don't complain when someone brings their own lunch so that's nice."

"That's cool. I really do hope your friends are all okay."

"Yeah, same... they're good folks. When this is over we're going to all get funnel cake or something."

"I wouldn't mind some right now."

"I'll point you to one of my favorite spots when we get back.... hey kid, you see that up ahead?" 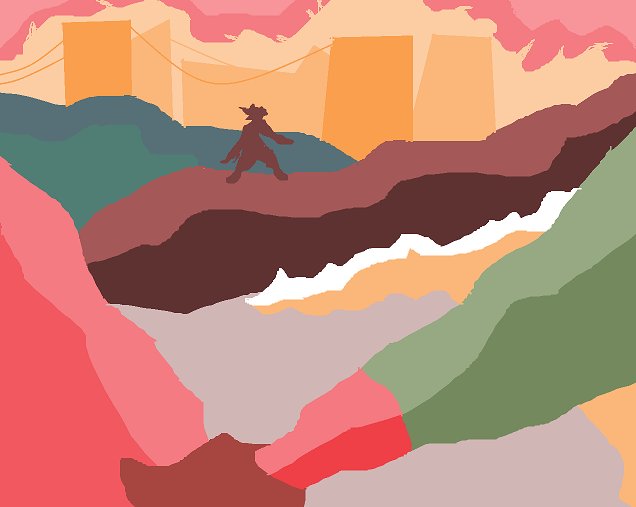 There's someone tall in the distance. "Yeah, what about it?"

"That one of yours?"

"Nope... must be someone else who wandered in. Just ignore them."

It's vaguely humanoid shape comes off as anything but familiar or friendly. It approaches you.

You're going to have to deal with it.

"Let's go around, I don't like the vibes that are coming off of it."

You can only do this for so long.

You try heading south but it only seems to pick up its pace. The construct looks at you with a dire face. 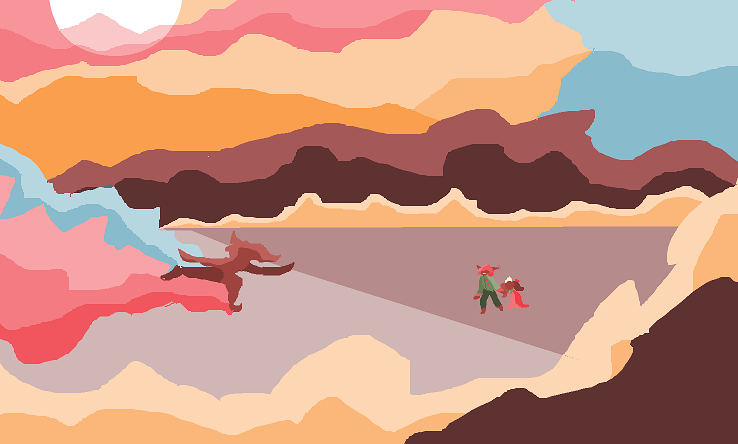 "If I go down I want you to run and never look back."

"What are you about to do?"

"Just trust me on this kid, I don't like what's coming our way."

You can help him out. Just trust yourself.

"You got your friends to find, I'm not ditching you."

He stands up tall, steeling himself for what's about to happen. 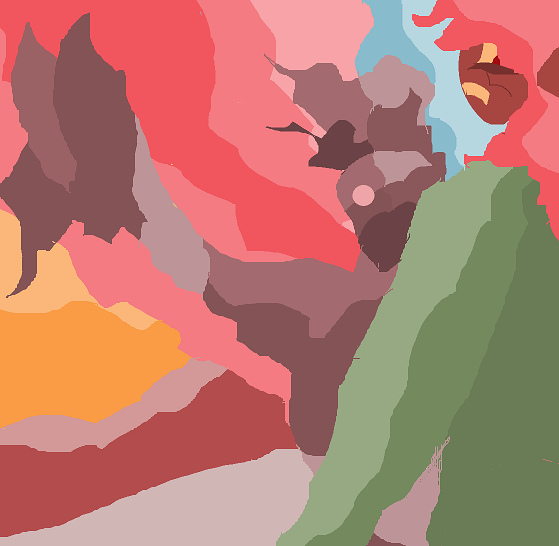 The creature is now clear as day, a mismatched pile of rags and flesh ready to put you in the dirt. It's absolutely fixed on the two of you and sprinting faster than anything you've ever seen in your life.

Fleming crashes directly into the beast, slamming his entire body to intercept its approach and grappling its jaw away from himself. Despite his best efforts though it does manage to drag its claws into his side and scrape away at his robotic shell. "What the fuck are you doing kid? Get out of here!" 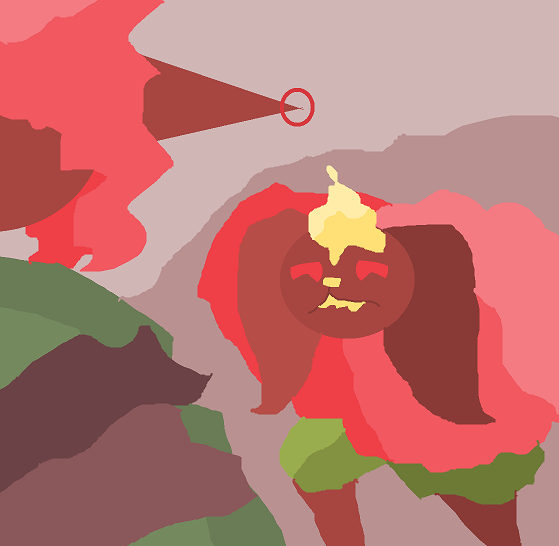 You feel a looming presence return.

It makes you feel stronger, doesn't it?

You watch as Fleming takes the fight to the ground in an attempt to pin the creature. It starts twisting and turning into a mesh of blades and leather.

It starts to swallow Fleming into its mass.

You stand by, unable to run or do anything.

In a surge of confidence you've never felt before you dive right in to help him out.

The creature doesn't hesitate to take a swing at you. 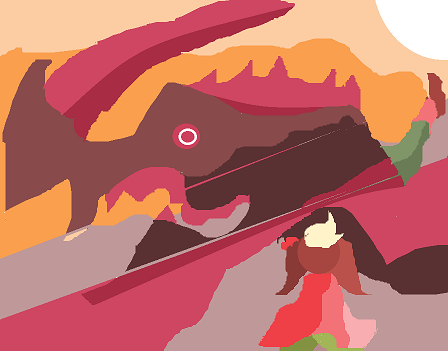 You may have made a huge mistake.

You brace for the impact.

You see all the mistakes you've made in the past minute loop in your mind.

And yet despite that, you're absolutely fine. 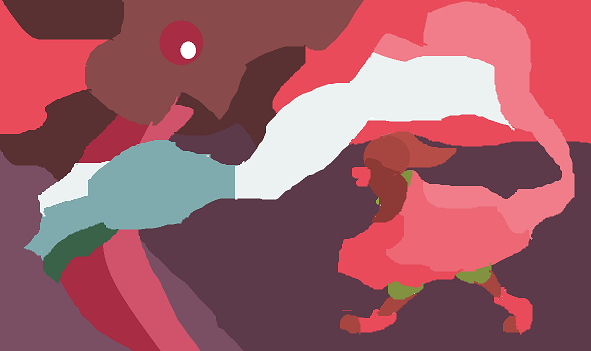 A large claw erupts from your body and grabs it by the arm.

You pull back in disbelief of what you're seeing. The claw yanks the beast off of Fleming and pins it down by its wrist onto the sand. Fleming doesn't waste a second and gets back up. He rushes over to take free blows at the creature and stomp it down.

The claw recoils back into you. The creature takes a massive beatdown that you're not sure you have the stomach for. 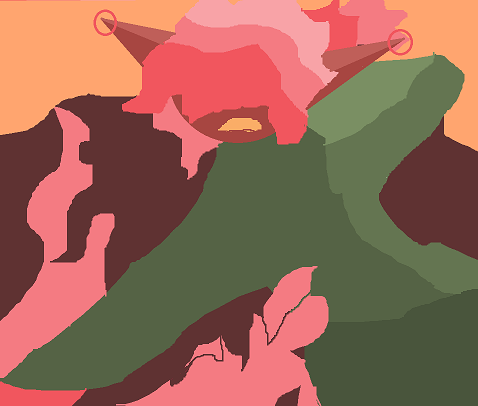 He doesn't give it a single moment to breath.

You close your eyes. You don't want to see it.

It's the most brutal shit you've ever had to witness.

You hear the sound of crunching, the shrieks, and then after what feels like too long... silence.

You're still too afraid to open your eyes. You hear Fleming walking toward you.

"Keep your eyes closed. Gonna follow the path we were going alright?" 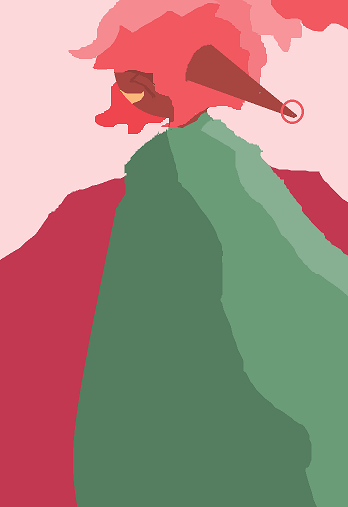 He takes your hand and leads you. He talks to you the entire way.

"Just don't look. Not until we're far enough that you can't see any of it."

"Promise you won't tell me too early?"

"Promise. I'll be honest, I don't know what you did back there but it saved me. Saved us both."

"Don't think I did anything."

"I mean, someone had to do it right? Maybe you just got a guardian angel."

Guardian angel. That has a nice ring to it.

But that's absolutely not what happened.

"Figured as much. Not supposed to be here either I think." 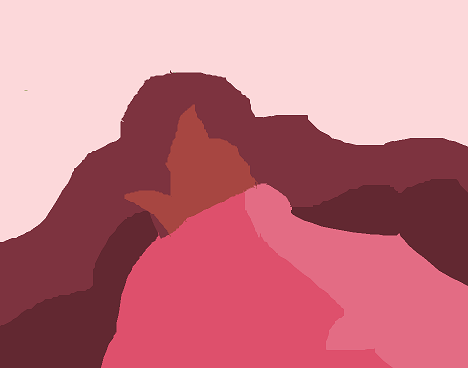 "We're almost there. You can probably open your eyes now."

"I think I'm gonna wait until we're out of here."

"Just a bit further then. You're a good kid, you did real good back there."

"Really? I barely did anything."

"Yeah you did. Don't let anyone ever make you feel weak. You got a lot of promise."

You feel the dirt slowly transform into concrete.

"I think I'm gonna go straight home. You should too Lex, alright?"

"Think I see my friends. You know the rest of the way?"

"I'm still a little scared though."

Your feet touch the sidewalk. His hand lets go of yours.

You open your eyes.

Your parents will kick your ass for being out this late.

There's nobody else around, just the city in the distance.