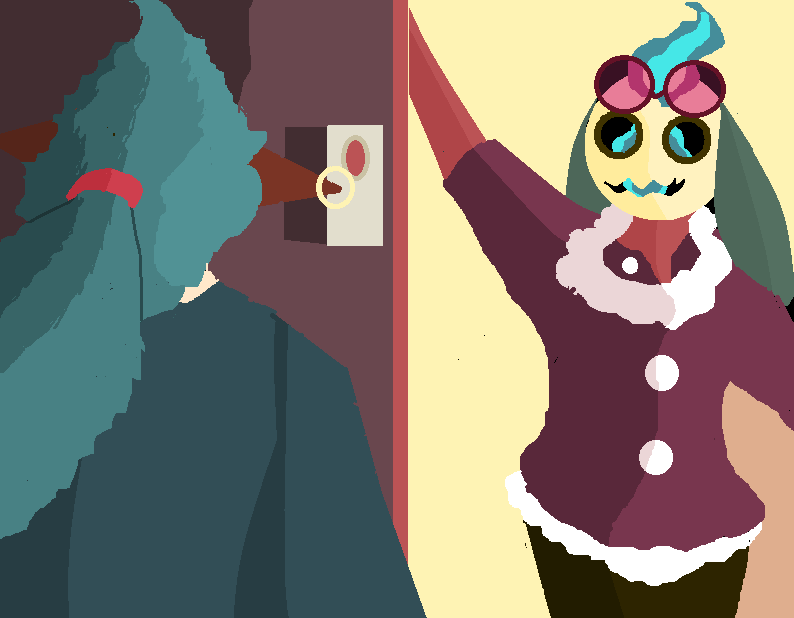 Lex and Dotty knocked on the door despite a perfectly good bell being on the wall. After waiting not too long, a pumpkin-headed dopple arrived to open the front door. Spice greeted the duo with his carved grin.

Spice: Lex! Been a hot minute since we last met up, how've things been?

Lex: Busy! You gonna let us in?

Spice: Yeah, yeah. Come right in, this your friend?

Spice held out a hand to the elegantly dressed robot.

Spice: Dotty, right? Been told a lot about you.

Dotty took his hand and shook it firmly.

Dotty: Yep, what's she told you?

Spice: Things that'd make you blush probably, has a lot of nice things to say about you.

Spice: Never know with you. Anyway you two come inside, make yourselves at home.

Lex and Dotty stepped into the apartment.

Lex: Your boyfriend around?

Spice: We're technically not together right now but uh... yeah, he's just setting up some stuff up stairs quickly. No worries. Witch stuff.

Spice: I wanna respect his wishes, you know?

Lex: You two gotta figure yourselves out.

Spice: It’s fine, it’s fine! We just gotta get over a few little hoops, Targe still feels guilty about you-know-what but like… I think he really wants to.

Spice: Only a little.

He knocked on the side of his pumpkin head.

Spice: That’s not a standard mod, some scrappy little magic from a little accident.

Spice: Witch stuff gone wrong. I don’t mind it much, grown on me.

Dotty: Is the pumpkin actually part of you then?

Dotty: How do you breathe or sleep or… anything really?

Spice: Honest answer? I got no clue. It works just fine though even if I occasionally need a new casing. No different from OBJ, just fire instead of slime. Gist is though we both messed with some magic that’s a little out of our paygrade and uh…. splat.

Spice made an explosion gesture with his hands.

Spice: Head gone. Was scared shitless, thought I was dead for real. Targe was quick though and kept my soul attached to my body, so it all worked out. Still feels bad about it though, no matter how much I tell him I’m not mad.

Spice: Course, think you’ll get along with him. He's been better lately so... I think whatever we got will figure itself out sooner or later. He just... doesn't like calling anything by formal names right now. Lex, you know how he is.

Lex: Yeah. You hang in there.

Lex: If you need a little help from a couple of wingmen, we got you covered.

Spice: I appreciate it but I don’t think I’ll need that much. Hate to cut off a good conversation, but you know when Kurt's coming?

Lex: Yeah, he messaged me saying that he might end up having to meet us at the scrapyard. You know how he is.

Spice: Didn't hear anything actually, good to know though.

Spice: Mm. Gonna go check on Targe quickly, you can chill out down here. Feel free to grab snacks and stuff but don't fill up too hard incase we go to the festival after. I figure y'all want room for the good stuff after.

Lex: I'll be good, don't take too long though.

Spice nodded. Lex hurried toward the living room to sit next to Dotty. Spice scurried up stairs quickly to Targe's room and knocked on the door. Targe responded from the other side.

Spice: Lex and her partner are here, Kurt is gonna meet us at the scrapyard.

Targe: Cool, give me just a sec to tune up here. Tools being fussy.

Targe: Yeah, just gotta make sure we do this right. If we do a solid job of getting those spirits to rest it’s good vibes for the rest of the year. If we don't, well... we’re not buying any lotto tickets for awhile I guess.

Spice: I feel that. Either way we'll be fine I’m sure. 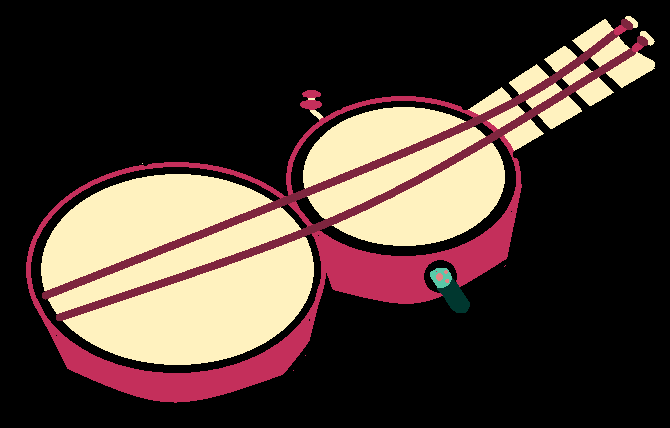 Spice stood out of the way of the door. It swung open as Targe slams it with his elbow, hauling out a rather large string instrument. Nothing about its design is sensical and the idea of it playing anything seems absurdist.

Targe: We're gonna be entertaining some ghosts for a little bit, hope you got your game face on.

Spice: Always do. You need any help with that or...

Targe slung it over his shoulder.

Targe: I got this, no worries. Guests ready for this?

Spice: Yeah, should be.

The two made their way down the stairs, Targe reaching the base quickly and knocking on the wall to catch the attention of Lex and Dotty. The duo looked over the back of the couch.

Targe: All's good. Gonna fill you both in on how this is gonna go, especially the newcomer.

He looked over at Dotty.

Dotty: Yeah, new to all this so wouldn't mind a good explanation.

Targe: No prob. So we're gonna head off to the scrapyard together, gonna be other witches there. Glad you both dressed nice for the occasion, last thing we want to do is look like a scrabble you know? We'll set up some pollen that'll make spirits visible for us. There should be dispensers, but we brought our own in case. We gotta make those ghosts feel comfortable and entertain them to the best of our abilities. Even just being there to keep them company does plenty.

Lex: How many is it gonna be this year?

Targe: A few other groups likely, all around the size of ours. The older witches will be there as expected to keep things from getting out of hand.

Dotty: When you say ghosts, you mean like... actual ghosts right?

Dotty: And we will see them.

Spice: Nothing less! Promise you they aren't dangerous so long as you're not going out of your way to provoke them. Just be nice and have a good time.

Targe: Well worded. We're gonna spend a bit of time there, then when it dies down a bit maybe sneak in some festival time. Hope y'all brought your own cash for that because we can't be handing out too many freebies. Gotta enjoy our own time too.

Targe nudges Spice with his elbow. Spice gives him a cat-like smile in return.

Lex: We're gonna meet with Kurt when we get there right?

Targe: Guess so, he wanders, so hard to say for sure. Did he mention anything about where he’ll actually be?

Lex: Nope. It’s a clearing though, so odds are we’ll see him?

Targe: Figures. Hopefully he'll pop up. Y'all ready to go?

Spice held the door open for the group. The witch troupe of four shuffled out quickly, leaving only the light of the little lamp from the kitchen behind.