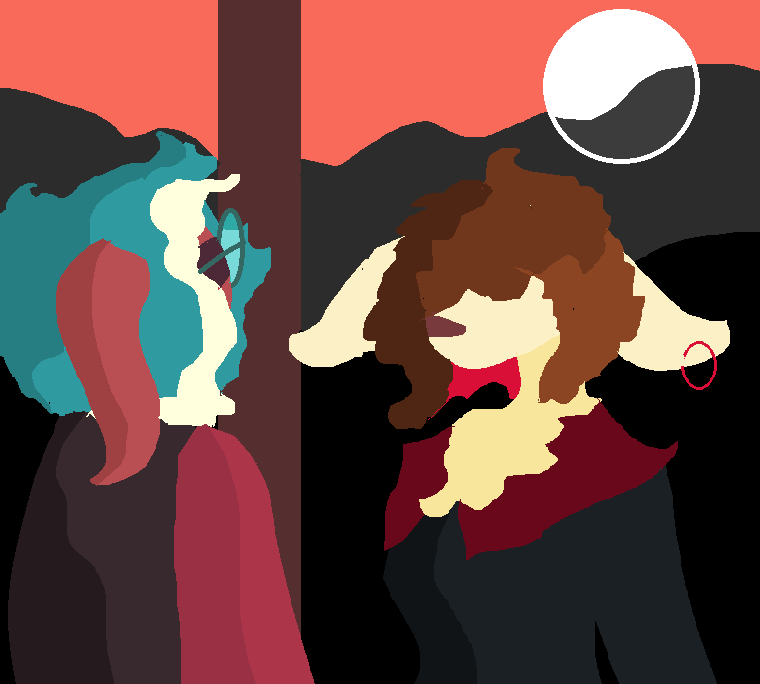 It had been two months since you encountered what those up top refer to as "The Blizzard."

Dotty was around as usual, she'd been great. She'd be here any second to visit you.

You were currently under the eye and care of the greater god Mori's demon's as compensation for your group getting caught up in everything.

For the most part, everyone recovered fine from their injuries.

You were Jam, and you've been very lonely in your thoughts.

To be more specific, Lex hadn't been around much aside from the occasional murmur to remind you that she was somewhere floating about.

Right now you were pretending to be asleep in your bed, waiting for that knock on the door at any moment.

You were in no rush, you were comfortable laying down in your pile of blankets.

Despite all your anticipation, it was the doorbell that rung.

It must be one of Mori's folks there to talk to you.

You crawled out of bed hesitantly after it's rung a second time.

You slumped over to the door. You're already dressed up since you do this pretty much every other day at this point.

You opened it. It was Lupe, one of Mori's best duelists, long time demon, and very much a dog. She was here to check up on how you're doing.

Jam: Not much. She's been louder lately but nothing I can really tell, you know?

Lupe: Sorry to hear that. Good news is we've gotten final approval to bring you in to study your case and help you out. We also got approval for your friend Dotty to stay with you so you're not alone.

Jam: Will it help?

Lupe: Maybe, we have a expert on this sort of thing on us. Traveling witch named Manzana. She'll be able to dig in and probably find out what's going on with Lex. We can do this as early as tonight if you confirm right now.

Lupe: Good, good. Are you holding out okay?

Jam: As best I can really. Like... I'm still not used to being the one in control all day. I'm not used to being alone like this, or having to be the one to handle all the interaction or... I don't know just... fuck.

Lupe: You have any idea what really got her to go quiet like this?

Jam: I don't know. She got hit really fucking hard, way harder than anything in her life.

Lupe: A lot of fractures, that checks out.

Jam: Right like... she's broken bones before but I guess just being shrugged off and slammed that hard into the ground broke her a little you know? Real fear for both of us.

Lupe: You could've died, it's pretty understandable. Still gotta admire you and your friends for jumping in to help me fight a hell beast like that. Don't know how that fight would've gone without your help. Just wish nobody had to get hurt. Doesn't help that the thing just got away free though.

Lupe: Sorta. Still getting storms when we're 2 weeks into spring you know? Feels bad. Makes you wish the seasonal rabbit would show up.

Jam: That a thing? Always assumed it was a story for kids.

Lupe gave you a shaky hand.

Lupe: There's a couple of historical basis behind it. Anyway, there's still a lot of loose ends to deal with.

Jam: Yeah... Creature is still loose, poor DOP never got back home... Dotty hasn't been herself either.

Lupe: Mm... Tell you what though, we'll at least get that last part figured out soon. Gonna come back in the evening. You and Dotty grab anything you need and we'll head off as a group.

Lupe: I mean you've waited long enough and we got the opening so.. yeah.

Lupe: Eh... thank Mori really. They would've gotten to it sooner but they got a lot on their plate you know. Poor thing wants to help as many people as possible but it can be tricky when there's so many on this island.

Jam: Still... everyone's done a lot for me these past couple of months. Really grateful for that.

Lupe: We gotta look out for each other, this entire island is family if people are willing to put in the work.

Lupe placed a hand on you shoulder.

Lupe: I'll see you tonight. Spend the day doing something nice for yourself, for you and your friend. I think you both could use that.