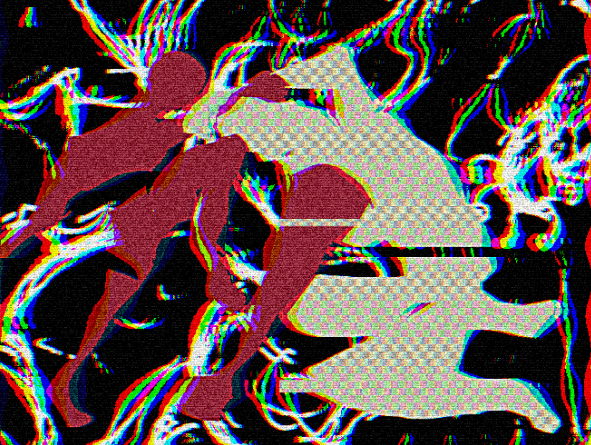 You treaded into the void, the only sign that you're still in reality being the skies above.

Even then, it had got such an unnatural vibe that you're not entirely sure if that's true.

Maybe this was kind of a bad idea.

Someone's gotta do it though.

Maybe, not sure why it has to be us.

Because.... something has to be wrong if nobody up top has managed to stop it by now right?

You mean the gods and their folks?

Yeah. They must be having just as much trouble if they've let it go on a day like this.

Fair enough. In that case you mind if I take charge during the walk? It's been a bit and I'm feeling a little lonely in here...

You were now Jam... that felt funny to say it like that. Like a little narration in a game of sorts.

You look over at your friend.

Jam: Heeey! Popped in to see what's the deal with things. God it's cold....

Dotty: You caught up on what's been going on?

Jam: Mmhmm. Been watching the whole thing. Filled in on everything including the new guy. How you doing by the way?

Jam: Mmhmm! Jam, happy to introduce myself. I'd shake your hand but it's kinda cold and I don't wanna expose myself even a little to the elements like that you know? So I'll greet you proper later.

DOP: That's fine. your voice is different from uh.... Lex. That was the name?

Jam: It does that.

DOP: I knew someone in the past like that, two people in the same body. Different voices made them easy to tell apart. I like the sound of yours.

Jam: I wanna hear it anyway. No judging.

DOP: It's familiar... a lot of things about this place are. That's not weird is it?

Dotty: I mean you knew me right?

DOP: In a way. You're barely the same person though if you can't remember any of it. I just wonder what happened after all these decades...

Dotty: I mean if he knew me back then he's gotta be pretty ancient. Robot stuff is complicated like that.

Jam: Yeah, that checks out I guess.

DOP: It's a bit of a long story really but... you were a hero who did a lot for me and the people back where I came from. You, your friend at the time, and the director all showed up and salvaged us from one big crisis. Made life better for everyone... and then you all had to leave. Go back to your own world.

DOP: It really was! I really owe you for everything you'd done... I'm just a little sad that I never got to repay you before-

Dotty: Before my memory went to shit yeah. I mean it's alright, you're doing us a huge one by coming out this far with us.

Jam: Yeah no it's a pretty huge deal.

Dotty: Don't downplay yourself like that! This is a dangerous job!

DOP gave you all a genuine smile... it slowly fades as you can hear the clashing of metal up ahead.

Jam: What's that? You hear that?

The group made a big hustle toward the source of the sound. A mix of metal clashes, hissing, and the occasional pained sound created a trail toward two figures fighting in the snow. One bundled up heavily with a classic dueling blade in hand, the other significantly larger, visibly distressed and covered in ice.

You couldn't help but feel your nerves build up. You all recognized that sword as a vintage style only belonging to demons from the days of old. One of the local god's.

The cloaked demon took a huge hit, hammered in the face by the elbow of the larger fighter and crashing directly into the snow.

You tag in. You're Lex. Sorry to shove you out like that... feel a fight coming on.

You're valid, can't scrap to save my life.

The large beast waded through the snow to catch up to the demon, you and Dotty both rushing in to intervene. You group tackled the beast onto the ground and start pummeling with every bit of energy in you.

The beast managed to knock Dotty off as it gets back onto its feet.

Despite the snow making it hard to move, you managed to awkwardly duck the next strike, avoiding getting hit and finding an opening to grab the beast. You grappled it and slammed away.

After all your efforts however, it managed to break from your grip and slammed you into the ground with a single hand.

Your head was spinning, you took a massive hit directly. As you fought to stay conscious, you witnessed the cloaked figure land a big strike on the creature, stabbing it through the chest.
The creature seemed to stagger for a moment before shoving the demon off. The sword was ejected from its chest into the ground.

You found yourself feeling weak in all of this. You struggled to stay awake….

You had to make sure everyone is okay. You watched as the beast and the demon grapple…

You felt yourself get dragged across the ground as your vision darkens.

You were... being tagged out.

I'll cover for you from here.