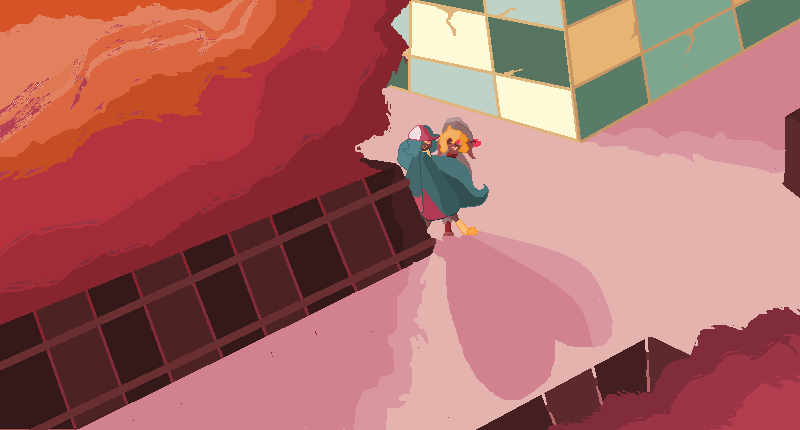 Lex watched the time tick away on her watch, leaning on the fence just on the outskirts of her neighborhood in anticipation for her date to arrive. It's 15 after what was originally planned, but she wasn't too worried yet....

God she needed to get a cell phone....

Almost 30 minutes in, a striking blue construct in a sporty outfit sprinting into view. She waved at her from a distance and got a jokey salute in return.

Lex: You showed up!

Dotty: I said I would! Sorry for being late, work kept me a bit longer than I'd like.

Lex: That's all good, figured it was something like that. What happened?

Dotty: Did a course on dueling safety, lots of questions which is good but also meant going a little over to cover everything. You know the drill.

Lex: That why you're not in your usual uniform?

Dotty: Yep. Refs don't have the same type of protection that's standardized for duelists so it's no good for explaining.

She pointed to Dotty's collar. It covered the lower half of her face and carried a distinct toothy pattern.

Dotty: Asked for that specifically when I got this made, seen some people do something similar and thought it'd be fun you know?

Lex: Makes you look like a vampire. Low key goth.

Dotty: Just a little splash of it. You got anything like that on your uniform?

Lex: Nah, my dueling outfit is pretty standard. I wanna get a fancy custom one like yours though if I ever get sponsored. Like, something unique.

Dotty: You'll get there. Today been good for you?

Lex: Not really... but it's already getting better.

Dotty's earpieces lowered the slightest at the compliment.

Dotty: We'll make today nice for us. What's up though?

Lex: Just feeling a bit off lately, it'll go away. Don't wanna derail things too much though.

Dotty: You can talk about it a little, don't mind at all.

Lex: Nah not yet... just wanna focus on this right now if it's okay. Been a bit since we've gone out like this, that okay?

Dotty: Yeah, whenever you feel up for it. Sorry I've been so busy this month...

Lex: No worries! You know you can talk about your stuff too, I know work gets stressful for you.

Dotty: Just a little, lots of getting yelled at that I "got the ruling wrong." or that I "step in too much" and it's annoying. I'm not going to look away when someone is going for kidney punches. Not for anybody.

Lex: Not even me?

Dotty: Especially not you.

Dotty: Nothing personal but I'm scared what'd you do in a fight with no rules.

Lex: No that's super fair! You should be!

Lex: No it's fine! Like... I like hearing you talk about life stuff. You don't do that enough.

Dotty: Same. You're the only one I get to really do this sort of thing. For now though I wanna get back to business.

Dotty: Big ones. I say we deviate from our usual a bit.

Dotty: We go to town a bit. Grab a bite, see a show, yell in the parking lot after. Stay out just a little late.

Lex: Yeah! Absolutely! I know where the closest stop is, I can cover fare.

Dotty: I'll cover the way back. Dinner too.

Dotty: I'm not letting you buy snacks at the theater. We're sneaking shit in. That everything?

Dotty: Let's do this.